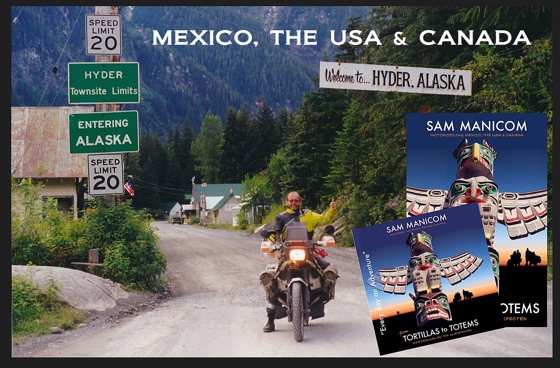 Click here to buy the Tortillas To Totems audio book

Invitation to a Bear Fest

After being delayed for far too long by a Californian vineyard and all its delights, we are finally riding north through Canada. Everything is just about as perfect as it could be for a couple of overlanders. We were riding through a country where we were struggling to choose between the buzz of the ride, or soaking up the views.

‘The rolling countryside continued to roll, for hour after hour. The bikes’ engines ticked and purred as they should and I sat enjoying the ever-changing scents and sights of Canada. Evergreens were more and more frequent and the lakes became darker and more tea-like with tannin oozing in from the forests. Rivers began to appear more opaque as rocky silt became increasingly concentrated. Then, around just another swooping bend, we found the reason why…’