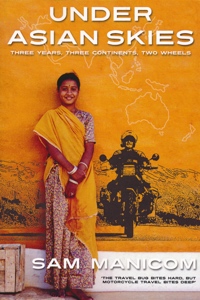 Motorcycling, people and adventure are the inspirations for Under Asian Skies.

When I set off to spend a year riding the length of Africa on a motorcycle, I’d no idea if I would like travelling by bike, or whether I would survive; I’ve an active imagination, and I’d been riding a bike for just three months. At times the roads made me feel like I was some sort of motorcycling accessory, not the person who was supposed to be in control. I learned lessons the hard way – falling off hurts, and jail in Africa should be avoided at all costs.

The bike acted as the connecting factor between adventures. It got me into and out of trouble. It gave me time to myself when I was on ‘intake overload’ from life on the road. It gave me the freedom to explore on the spur of the moment, and to take advantage of opportunities as they presented themselves. Travel on two wheels took me from gentle mellow cruising days, to full-on adrenaline-packed adventure and my bike frequently broke the ice between myself and strangers.

It’s the people that make a trip like this into a success. They may wish to live your dream with you, or find empathy with some aspect of your nomadic adventure. Landscapes, climates and histories enthral, but it is people who make every day significant. For the traveller, people bring joy, frustration, and warm generosity. It was people and the act of riding a motorcycle 22,000 miles through the magic that is Africa that changed me. By the time I’d made it to Southern Africa, I was an addict; I wanted more. It felt as if the journey had barely begun, and that I had only just discovered how to look at the world. On impulse I shipped across the Indian Ocean to Australia, and headed for Asia.

There’s a magical, captivating, buzz about being on the road under Asian skies. As I motorcycled across the continents, I was constantly challenged by things I’d never dreamt could happen. Things I thought I knew well were changed by the adventures.The stunning beauty of the land enthralled, and the people were an enigma; they were fascinating. There was no end to the adventures I could have and I sought them with my eyes wide-open, or they came to me!

This world of ours is amazing and biking is a stunning way to see it. I’m incredibly lucky to have been able to share, though briefly, other people’s homes, their dreams, their lands, their cultures and their travels.