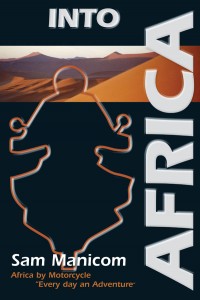 I see myself as a pretty ordinary bloke and when I sat down to write this book it all felt a bit of a cheek. I mean who was I to think I had the right to write? I wasn’t sure, but the itch in the back of my mind came from people I’ve met over the past years. Many said to me, ‘You’re incredibly lucky to have been able to travel the world, I wish I could’. At first when people said that, my self-centred attitude was ‘if I can so can you’. I believed that people generally have the ability to make their lives head in the direction they wish; I was wrong.

Pre-Africa, my life was as ordinary as life can get, but something wasn’t quite right. I had a reasonable education, a job, and I was healthy. I was a shop manager on Jersey; the work was manic and decidedly full time. This didn’t leave much freedom to enjoy the money I was earning, and I never managed to see my family in England as often as I ought. The long hours meant that I was beginning to lose touch with friends too, but my sights were set on promotion and a fat pay cheque; they had been for too many years and I’d almost made it. I never had the time to feel properly dissatisfied, but I was beginning to wonder what it was all for. Could I really see myself doing the same thing forever? Then, fears of a recession began to creep into the world of retail and I saw my hard earned future disappearing. This look into the future set me dreaming of the road and taking a close look at my life as a whole. I knew that I wasn’t the first person to do this and that encouraged me to think outside the boundaries.

I’m not sure exactly when the motorcycle idea started, but it must have been when I’d realised that I could actually do anything I wanted – if I put my mind to it. At the time that was an inspirational feeling. There really was nothing to stop me but I did try to find excuses not to go; after all, the dream wasn’t ordinary even if I was.

There was something really rather nice about the notion of riding a motorbike the length of Africa; the idea appealed to the romantic in me. I’d backpacked in different parts of the world and particularly liked the idea of the freedom a bike could give me, especially after being stuck indoors for so many years. The lazy side of me rather liked the thought of not having to carry a rucksack! It also felt like I’d be taking my life and turning it inside out. The more I thought about it, the more I came to the conclusion that my life needed a damn good shaking – what better way to do it than this. On top of those thoughts there’d been a niggling voice in the back of my mind which had popped up far too often for safety. It kept spouting the words, ‘A challenge like this will be fun!’ A bike would be the perfect way to get into adventures, but there was a lot to learn – not least of which was that I didn’t know how to ride a motorbike.

The first person to make me ponder the freedom I had was Charley. He looked and sounded desperate to get out on the road. He’d read travel books and lived the world from those pages, but wanted to get out and taste the wealth of experiences for himself. ‘I simply can’t’, he told me. Charley was an only child, his father was dead and his mother was heavily disabled. ‘I’m all she’s got’, he said. ‘I can’t leave her. All I can do at the moment is live my dream through others; you are incredibly lucky.’ I was humbled by his acceptance of his situation, his loyalty to his mother and the fact that he hadn’t allowed his dream to die.

I heard stories of situations and priorities in other people’s lives that made me realise how fortunate I was. I learnt from the people I met on the road that we don’t all have the ability to make dreams a reality. We can enjoy the high points we do make happen, and value them for what they are, but we can also taste and develop our dreams through the adventures of others. What sort of humans would we be if we didn’t dream?

Into Africa is written for those of you fortunate enough to know that you actually can go out and live the dream. Value that, and just do it; you’ll never regret it. I hope that the book will be an encouragement.

It’s also written for those who love the sound of travelling but are quite happy with adventure from the pages. I too am drawn by tales of the road, and know the value of a comfy armchair at the end of a long day. I hope you will enjoy the mad, the scary, the beautiful, and the surprises. There were days that my traveller’s guardian angel took time off without warning me – I managed to get myself arrested, jailed, and shot at. I also cost my medical insurance company a fortune! When my angel was there, the journey was a combination of fascination and adrenaline burning fun.

In particular though, this book is written for those of you who like Charley live in circumstances that may never allow you to ride two wheels into adventure. I write with full appreciation of exactly how fortunate I really am. If you can’t do it, then live the dream with me. This is the story of a yearlong trip through one of the most fascinating continents on earth – Africa.

As the plans came together I began to feel a tad guilty about the concept of being a relatively rich tourist riding through some of the most poverty stricken areas in the world. I tried the argument with myself that by going on this trip, my experiences and the knowledge gained might help in some way, but I wasn’t very convincing.

I decided that it might just be possible to raise money for a couple of relevant charities. I chose Mission Aviation Fellowship because I wanted to do something to help the countries I would be seeing, and even perhaps help some of the people I might meet.

The second charity was Children in Need; helping those at home is important too. I also hoped that by following my trip, the children in the schools on Jersey who were collecting money might glean value from their vicarious contact with the countries I would be travelling through. The children liked the idea that I would be sponsored by the number of countries I managed to make it across; after all, I was still learning to ride a bike. One of the children asked me how many times I was going to fall off. I lost count!

Into Africa is written for all of the children, teachers, parents and friends who became involved.

The last group the book is written for are the people I met along the way who showed me, through acts of great generosity and simple kindness alike, that this world of ours is a fantastic place to live. I don’t really know how to thank Peter and Edith, without whom at worst I’d be dead, and at best I’d be blind.

You can order copies of Into Africa directly from us, as a download from Kindle and now also as an enhanced e-book from Apple i-Tunes. Copies are also available from mainstream bookshops.