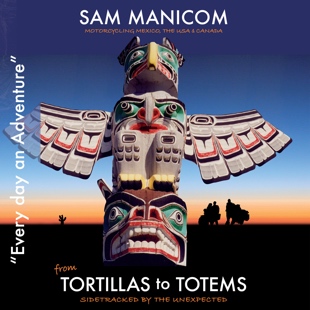 Sam Manicom’s dramatic fourth audio book takes you on an enticing yet frequently challenging motorcycle journey across the ever-changing landscapes of Mexico, the United States and Canada.

Sam’s partner Birgit is no longer a novice motorcyclist – riding through southern Africa and South America turned her into a rider capable of facing any challenge. But Sam was worried.

As they arrived into North America they had been travelling around the world by motorcycle for six years and he was beginning to think that North America was going to be easy; too easy in fact. Were all the challenges of travel in the developing world countries going to be missing? Sam couldn’t have been more wrong.

Samuel Johnson wrote, ‘The use of travelling is to regulate imagination by reality, and instead of thinking how things may be, to see them how they are.’ After all, aren’t these some of the main reasons for going travelling? To experience as many different things and ways of life as possible? To discover new and wonderful things, but also to have preconceived ideas challenged.

This true life story has more twists and turns than a Rocky Mountain Pass, and as it did them, at times it could challenge you too. Woven into this surprising story are canyons, cowboys, idyllic beaches, bears, mountains, Californian Vineyards, gun-toting policemen with grudges, glaciers, exploding volcanoes, dodgy border crossings and some of the most stunning open roads that a traveller could ever wish to see.

Adventure Bike Rider Magazine ‘Globe-trotting biker Manicom’s a natural storyteller. Although this trip may sound like a standard ride through familiar country, be assured, it isn’t!’

Listen to a sample from Chapter 1 (Predators and Border Queens)

After nearly two years of meandering through the dramatic and fascinating countries of South and Central America, we are about to ride into North America. The first days didn’t work out quite as planned…

‘The bike and I leapt violently into the air. As we did so, all the thoughts that had been meandering through my mind changed instantly into ‘Survive!’ My bike’s engine screamed as I involuntarily opened the throttle on take-off, this grip of fear almost making the situation worse… ‘

The Tortillas To Totems audio book is recorded by Kite Studios, distributed by Open Book Audio and is available to buy via Audible, iTunes and other retailers.

ADVMoto Magazine ‘You feel it, smell it… you freeze, you sweat, and you see what’s before him like you’re along for the ride. You are very much there. Sam’s UK accent and mesmerizing style, along with his masterful storytelling skills, culminates in a wonderful listening experience. It’s a rather intimate, honest style that easily carries you from chapter-to-chapter…’

South East Biker Magazine ‘To say that I enjoyed this book would be an immense understatement. I simply adored it, and would recommend it to anyone as a ‘must read’ or ‘must listen’. Tortillas to Totems is a compelling story.’

Aerostich ‘You’ll find yourself pondering the experiences and absurdities. And learning from the marvelously offbeat way of looking behind just about everything. It is all quirky fun that engages reader and author alike in unforeseen opportunities for adventure, education and self-discovery. Sam, who with his partner, Birgit, shares a unique outlook on riding, adventure and squeezing every last drop out of the peaks, valleys and open roads that are life. His best story yet.’

Scottish Daily Record ‘You could be his pillion, so well does he describe the sounds, sights and smells of the road. If you like bikes, riding and people watching, Sam is your man.’

RiDE Magazine ‘Sam Manicom’s appeal is that he’s the ordinary guy doing extraordinary things. He’s incredibly modest for someone who’s been so far…’

The Rider’s Digest ‘Any good travel book must involve the reader as well as inspire and Tortillas to Totems does just that with vivid descriptions of the roads, places and people that Sam and his partner Birgit travelled and met. By the end of the book I was definitely itching to get out on the road on an adventure like this – in my opinion, the best compliment one can pay to a story like this. Sam is a natural storyteller going way beyond “we went here and did this…”, getting under the skin of each country he visits…’