What a wonderful day at the Iconic Ace Café for the Overland and Adventure Bike day on Sunday 20th – A perfect way to celebrate one month on from the launch of The Moment Collectors. 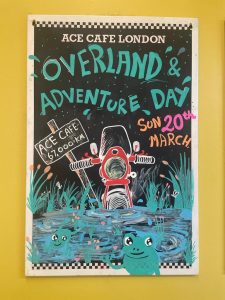 I’m going to be terribly English by starting off with a comment about the weather! We couldn’t have wished for much better. Sunshine with a few scattered clouds, in March?! I was wearing jeans and a t-shirt for much of the time! Sunnies and smiles were well and truly out for the day.
Just so good to see so many smiles.

Back to the weather for a minute, I’m commenting so much because in previous years we’ve had everything from icicles on the railings, rain storms and decidedly chilly, to snow! Yesterday was bliss!!!

Next, I have to comment on the people that were there. What a wonderful bunch. We’ve not seen many of the guys since before Covid kicked in, and some were out in the world travelling for the last years. I counted 11 nationalities. New friends were made.

A stand out attendee is Roelof who rode over from Holland for the day! Brilliant! And Birgit says the cookies he brought us were spot on too. Thank you!!! Superb to see you!!!

Birgit and I were there setting up at 7.15 and, yes I know this may come as a bit of a shock, I hardly stopped talking until 3.30pm when it started to ease off. Absolutely fantastic to see everyone and I really value you guys who could see how busy we were but stopped to exchange grins and thumbs up at least. 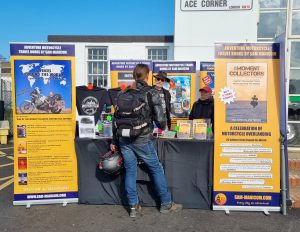 I must make a point of thanking everyone who handed us mugs of tea! You guys perhaps don’t know how special that was. I didn’t manage to get away from our stand for more than a 10 minute walk around and a dash to the wheels for more stock!

Part of the fun of the day comes from the exhibitors. Thumbs up to them!

I think it’s a bit of a busman’s holiday for them in that they are talking shop, but catching up with friends and past customers too. I saw loads of laughter happening. 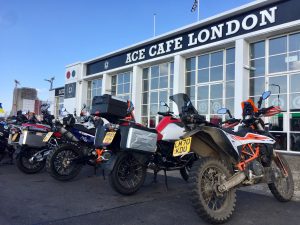 It was great to see such a wide range of bikes! I didn’t get time to go round and take them all in but there were some very well-travelled machines there, and several that I know are heading out in the very near future. Happy travels to those guy!!

A highlight of the day was seeing the authors there book signing. Derek Mansfield first. Not only was he book signing but he was raising money for Ukraine. Derek has very close connections with the country and was sharing up to date, factual information. I heard several people walking away making comments such as, ‘I didn’t know that!’ Good man!! And he told me how amazing people were with their donations. A huge part of the buzz of a day like this comes from the sort of people who go.

In order of appearance, it was fantastic to see 5 authors from The Moment Collectors there.

Graham Field was actually first on site that morning along with copies of his 5 titles. He told me that his 2 hour time difference from Bulgaria where he lives helped him to be up and about so early! Being efficient, Graham bought his despatch department with him too! Leastways, that’s what he, with tongue firmly in cheek, call’s his Mum!  Graham’s chapter in ‘The Moment Collectors’, is powerfully observational, at times funny, and times dry (or in this case wet) tale of the road in Mexico, that ends with a fine twist! 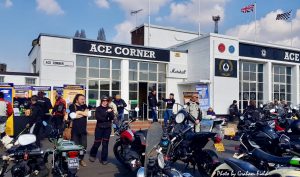 Next on site was EmmaLucy Cole who rode up from Somerset for the day. She and Birgit get on like a house on fire so natter was going nine to the dozen! This was Emma’s first time at the Ace Café (Read ‘The Moment Collectors’ for the story) and I could see she was having a ball! Emma’s chapter opens up a part of the world that few travel on motorcycles and very few spend real time immersed in the culture. Hers is an intriguing window into the Sinai, and a fine example of where courage and determination can take you.

The next author to arrive was Christian Brix along with his partner Heather (who very kindly took a bunch of the attached photos for me) and his trusty Tenere 660 travel bike. He also had his 2 books with him. Christian’s chapter is a beautifully descriptive and thought provoking story from a part of Europe that not a lot of people get to on motorcycles. I’m fascinated and delighted by the response that his chapter is getting. 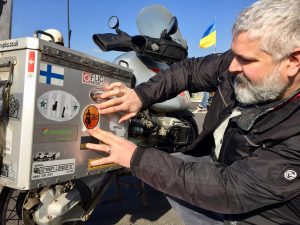 Last but far from least were Lisa Morris and her partner ace photographer Jason Spafford. This duo has been sharing their travels for, gosh, must be at least 8 years now. They’ve been doing so first as 2 Wheeled Nomads and now are exploring on 4 wheels. Lisa and Jason’s blogs and posts and articles are wonderfully descriptive both with Lisa’s words and Jason’s stunning photography and films. Lisa’s chapter in ‘The Moment Collectors’ takes you travelling the roads to Alaska and she does so in such a way that not only does she describe the landscapes beautifully but weaves in the history and the people.

All in there were a lot of signatures being collected by buyers of copies of ‘The Moment Collectors’. A fantastic opportunity! Hmmm, here’s a thought. I wonder what the chances of getting all the authors together for a party at the Ace Café are some time. At the moment, not so easy – last count they were spread across 6 countries around the world. Seed of thought planted!!

Rounding up what has turned into a long post, thank you very much to everyone who stopped with us to say hello, and who bought books and t-shirts! Just fantastic!!! Cheers!
Thank you also to all at the Ace Café for making us so welcome!!