By Sam Manicom on February 21, 2021 in Miscellaneous 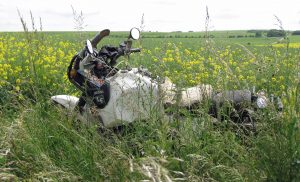 Here you see a fine example of the lesser spotted BMW R80GS in its natural habitat.

The much loved creatures have been ridden almost into extinction by enthusiastic hunters of full on adventure. Over generations they have created a passion and flow of adrenaline such as rarely seen in other species.

This is the paralever of the lesser spotted R80GSs and as you’ll notice, adventures during it’s lifetime have cause certain features to be enhanced. You’ll note the enlarged muscular fuel tank which has allowed it to run for many miles over rough terrain. It also has developed a hairy upper level which is said by many to enhance its comfort and endurance. Beneath that muscular exterior lies an enhanced suspension system which has developed over the years to allow great agility over all surfaces.

Usually to be found with scarred hides, these scars are not considered to be blemishes but to be proud reminders of past engagements with the challenges of adventure.

There is great debate in current times over the future of this rare beast and its older brothers and sisters. Should the few examples that now exist be allowed to roam free and wild, or should they be groomed and nurtured to be placed on display for the admiring many to observe and give due homage to for generations to come.

Many consider that this fine creature belongs roaming free in its natural habitat. That it’s talented pedigree should be allowed to continue to roam both Gelände and Strasse. Perhaps though, some will be placed on the pedestal that they deserve, for those future generations.

Presenting at the Online Armchair Adventure Festival Bootcamp
So few punctures over the 8 years?