One of the things I’ve been doing while we’ve been keeping ourselves to ourselves over the past months has been sorting out boxes of ‘stuff’. We have been laughing (cynically) about how much we’ve bought and have hardly used. A wake up call? Yep.

In amongst the ‘sorting’ there have been what I’ve come to call ‘gem’ moments. These two photos are two of them. Photos are amazing for the memories they bring aren’t they. 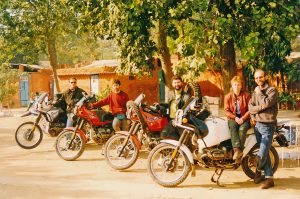 The first photo was taken in the overlanders oasis the ‘Delhi Tourist Camp’. The name sounds awful doesn’t it but the place was a real crossroads for overlanders with wheels. People heard about this place on the overlanding grapevine and headed there for R&R, to get paperwork sorted, to gather information, and to share it and to be tourists.

Gear off the bike we’d go exploring, or in shorts and t-shirts we’d be off buzzing around in auto rickshaws – always an experience!

The DTC wasn’t far from the centre of Delhi and the nearest landmark was Delhi Gate. If you’ve read Under Asian Skies you’ll probably remember that story.

With high walls and a guard on the gate, a restaurant, cabins and small rooms, camping spots and places to park overlanding trucks and 4x4s, it was overlanding paradise. Not expensive either. The rats were bigger than the cats, but we didn’t care. They didn’t bother us, so we didn’t bother them…

In the shot are a Norwegian guy, a Brit (Mark Manley), a German, Birgit (also from Germany), and me (some sort of Anglo African). We all have excellent taste in bikes as you can see!

As I remember, other bikes on the site were a Tenere (a Brit Gerard), and Africa Twin and a bunch of Royal Enfields that overlanders had bought to head off and explore on. One couple (he was Australian and she was a Brit) were setting off to ride back to the UK from Delhi. She’d only just passed her test. In Delhi traffic… Now that’s courage! 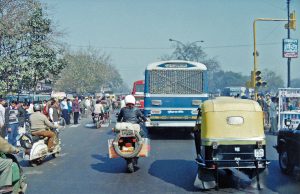 Heading for the open road

The second shot is of Delhi traffic early one morning. It was the best time to escape from the city. The traffic was slightly less but the key thing was that it wasn’t so hot. 10am onwards and it’d be baking, busy and you’d be blasted by the fumes. No fun at all. Oh, and it’d be noisy!!!

Thinking back to all of this makes me smile. I can see it, hear it and smell it. I also remember the smiles of the locals. The handshakes and the full on stream of questions. I know that some people got tired of them but I didn’t mind. After all, I hoped that when I was home and I saw someone unusual, that I’d have the courage to go and ask questions too.

Reader’s Feedback on Under Asian Skies.

Buy your Signed Copy direct from us with free UK delivery.

With Free Worldwide Delivery from the Book Depository