By Sam Manicom on August 8, 2020 in Miscellaneous 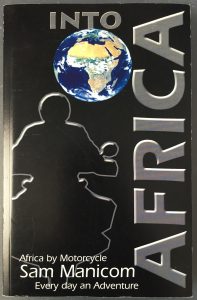 Having your first book in print, and the first physical copy in your hand is a very fine feeling for anyone who has had a go at writing. It’s a moment where plans, dreams and a huge learning curve come together. But its also the stage where you know that the hard work is about to begin. A large stroke of luck would be a tremendous thing.

That hoped for stroke of luck turned into a streak of amazing good fortune. It started when a good friend of the road, Mark Manley, introduced us to the owners of the highly reputable CW Motorcycles in Dorchester. “Sam, launch your book here with us. We will have an open day, and will help you with the publicity.” Dave and his partner Wally had an idea that their customers would be interested and so the next step was made. I of course was feeling extremely nervous and was uncomfortable with the thought that I might be wasting their time. Dave and Wally liked the book though, and the day came around fast! 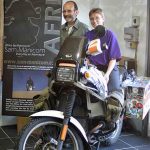 It was busy and because of the work they had put in, it was fun and a stack of new friendships were made that day. For a first time, ‘haven’t got a clue’ author, the sales were gobsmacking and when I got home I risked an order for more.

Magazine reviews started to come out and to my amazement, the reviewers liked it. ‘Upfront with adventure mishaps, dust, heat and the thrill of overlanding.‘ Africa Overland. ‘Inspirational Reading.‘ World of BMW ‘Excellent book. Gives a very honest account of life on the road, fear, boredom, terror, pain, love and humor, good and bad days of riding, it’s all there.‘ Horizons Unlimited.

Unbeknown to me, the next special thing was about to happen. I’d not realised that Dave Wyndham had influential friends. 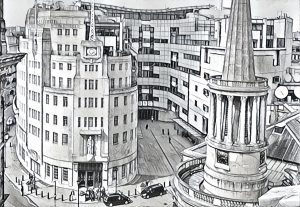 A phone call came out of the blue. “Hello, is that Sam Manicom there? This Johnnie Walker’s producer. Johnnie has said you have a story to tell and that he’d like you on his BBC Radio 2 Drive Time show. No, this isn’t one of your mates playing a prank on you (that was because of the stunned silence at my end of the line), this really is Johnnie’s producer. Can you come up to Broadcasting House in London?”

He then gave me a date and asked if I was free. Too right I was!

First thought. Gobsmacked. Next, good grief! Next, Broadcasting House? Where on earth is it? Next thought. This could be a complete disaster! You, on BBC Radio, at peak time!

I arrived a couple of hours early; determined not to let traffic, or anything else, make me late. I sat in the corridor just down from Johnnie’s studio watching people striding past me with curiosity plastered over their faces. On missions, none of them stopped. I had time. I could be patient but I could feel a bit of a headache coming on. The closer the time got to the appointment, the stronger it grew. I was washed some paracetamol down with Lucozade; I didn’t want to have run out of energy by the time the show started. It seemed a good plan at the time.

Finally one of the team came out and said, “Excuse me, who are you? We’ve been wondering what you are doing waiting here.” When I explained, he cracked up laughing. “You’d better come in. No one is ever early. Mostly people are late! Johnnie is going to grin and the producer is going to love that you did this.” 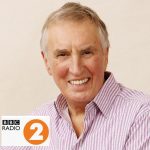 15 minutes later I was chatting with Johnnie. Before I knew it we were live, and the conversation rolled fast. Johnnie was absolutely fantastic. He’d obviously read my book too. I understood that DJ’s of this level would normally have one of their assistants do the research, and come up with the topics and questions. To my delight, not this time. Johnnie is a motorcyclist after all. We obviously chatted for too long because the show producer was suddenly making it very clear that we should let the next segment of the show roll.

I still have people come up to me at motorcycle shows and book signings telling me that this Drive Time show was what had them buying my book. I have some friends on Facebook who connected via the show too.

The next smile in this tale is that the BBC very kindly sent a recording of the show on a cassette to my mother’s when we were on a trip. For some reason I never listened to it (didn’t dare perhaps), and with the nomadic lifestyle Birgit and I have had for so many of the years, it was lost. Friends and I tried to obtain a copy from the BBC but no success.

Like many people during this Covid 19 period, Birgit and I have been having a full on sort out. We have a significant pile of books, CDs, clothes and unused equipment stacked up waiting to go to charity shops. Guess what turned up during this sort out.

You got it; the missing cassette. 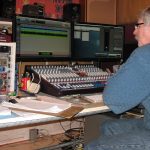 I didn’t dare listen to it for fear that it had aged badly, but sent it to Roger at Kite Studio. Kite Studio recorded my audiobooks and I was sure that if anyone would know what to do with it, Roger would.

I’ve just listened to the recording for the first time. That Lucozade paracetamol painkiller combo seems to have worked. I’m really happy to share it with you guys. I wasn’t an idiot more than a couple of times!

Colin had messaged me to say, “It was one of those rare moments in life where I just had to pull the van over and listen to the full interview”.

So here is the 20 minute interview (The recording was longer but for copyright reasons we’ve edited the music out).

Thank you to Johnnie and his team!

To Dave and Wally, to Birgit, Mark, Peter, Chris, Chris and Chris, Simon and Georgie, Rachel and Graham, to Colin for encouraging the hunt to happen, and now to Roger for getting the recording to me.

I’d also like to thank everyone who listened in that day and bought copies of Into Africa.

If you are someone who has read Into Africa at some stage, thank you very much. It’s down to your feedback and reviews that I was encouraged me to have a go at writing Under Asian Skies. 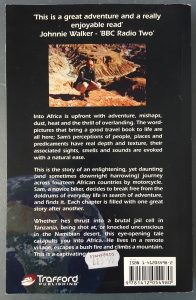 There is one final kick to this tale. A couple of months after the Drive Time show, I was doing a book signing in Dorset at a KTM dealership – JB Motorcycles in Crossways. They had done me proud with the set up and I had a queue of people wanting to buy a copy.

To my amazement, when I looked up at one stage, there was Johnnie standing waiting to one side.

He waited patiently until there was a gap and then said, “I just popped in to see how everything’s going for you Sam. So glad to see how busy you are.” We chatted for a moment and it was there that Johnnie said the words that are so proudly on the rear cover of the next print run of Into Africa. ‘This is a great adventure and a really enjoyable read.’

Thanks for everything Johnnie. 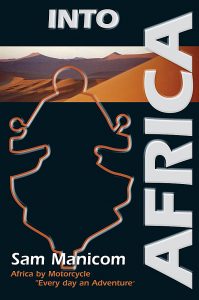 Into Africa is now available as a second edition with a new cover, colour photos and more stories.

It has been released on Kindle and as an Audiobook.

Signed copies Direct from us

The Audiobook versions from:
Audible
And i-Tunes 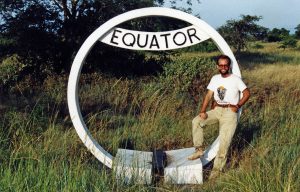 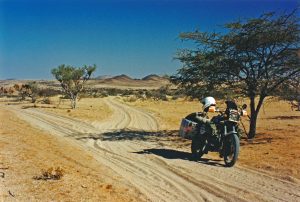 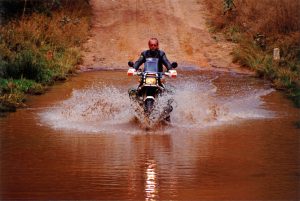 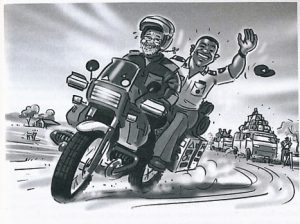 Sharing the ride with a Kenyan Policeman 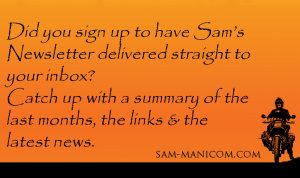