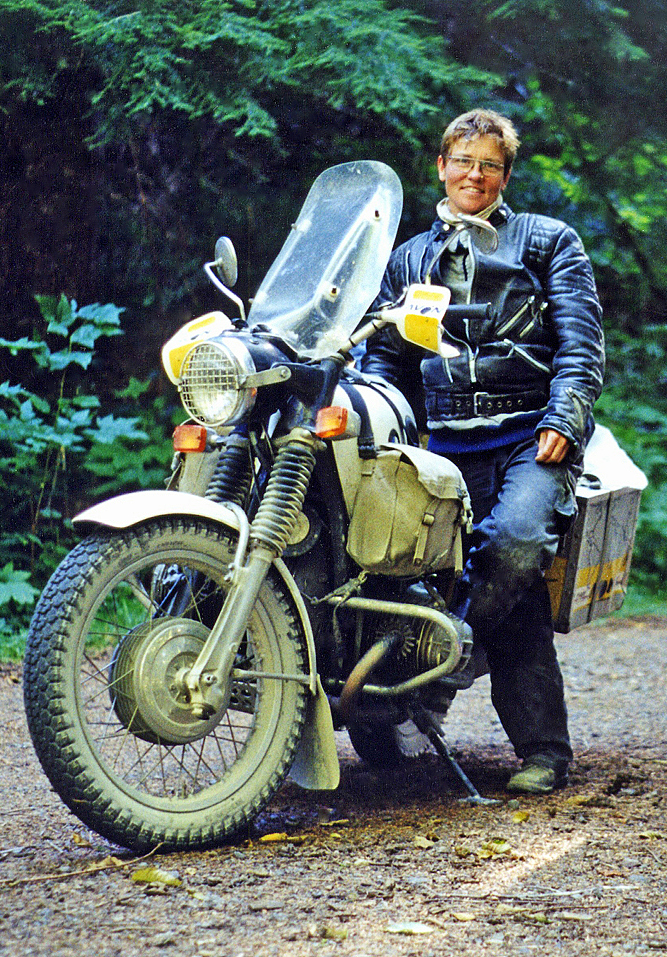 Meet my partner Birgit and her travel bike from the big trip. Our bikes have names so to introduce you properly to her 1971 BMW R60/5, meet Sir Henry the Hybrid. So called because this crusty old gent of a bike was found rotting under a tree and was brought back to life for the big trip. There is something elegant about him but he is made up of parts of lots of different bikes. Whatever was needed and was available. He even has parts of British shopping trolleys and Vespa scooters as his set up.

As for Birgit, she and I met in New Zealand. Our paths crossed in the small city of Nelson on South Island. I wasn’t looking for a girlfriend and she certainly wasn’t looking for a boyfriend like me. Life. Its a funny old place isn’t it. Things clicked and over time I managed to persuade her that a bicycle with an engine was a far better idea than the bicycle she was touring NZ on.

There was a sight problem. She has a motorcycle license but other than passing her test, she had no experience on a motorcycle at all. We started riding together back in Africa, she had just 600 miles experience on a motorcycle. She rolled the 600th as we rode out of the Port of Mombasa in Kenya. That night she rode her first ever dirt road. A good job it was dark. This road wasn’t easy. She nearly fell off her legs in the morning when she saw what the road was like!

We spent the next 4 and a half years riding together. A year through Africa, two years through South and Central America and a year and a half in North America. My third book ‘Distant Suns’ is actually based on her meticulous diaries.

Sir Henry, having been ridden on sand, gravel, mud, up mountains, and traffic dodging in cities like Lima, Panama City and Bogota, was Birgit’s ‘go anywhere’ bike until his retirement to Germany. One day we will rebuild this trusty bike.

This shot was taken after riding days of dirt roads in Canada.

These are the links to the two books where we were riding together. Birgit on Sir Henry and me on Libby.

Tortillas to Totems – Mexico, the USA and Canada

“The only person you are destined to become is the person you decide to be.” – Ralph Waldo Emerson