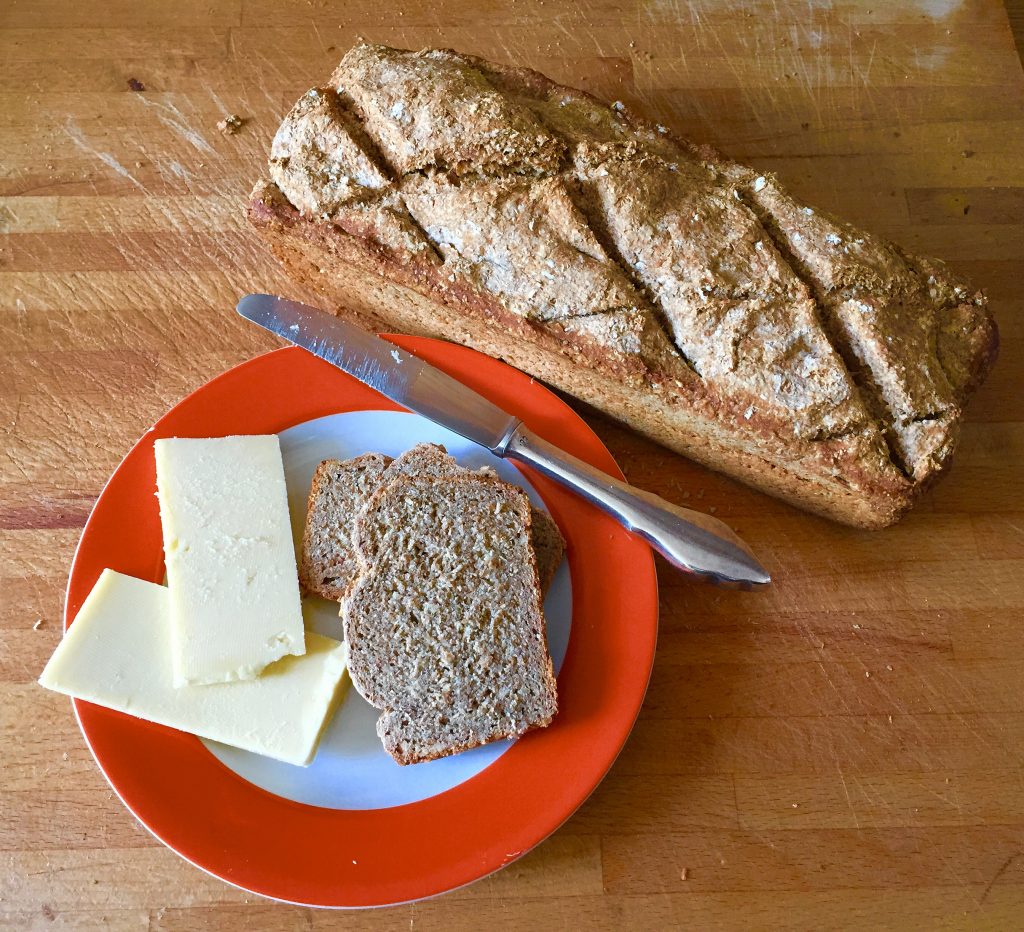 A while back I did a happy post on Facebook about bread that Birgit had made, and numerous requests for her recipe bounced back at us. Its a detailed recipe so I thought the best way to share it was here. For bread making first timers she’s also included some advice.

Before I paste the details in I need to give Birgit a thumbs up and a “Thank you”. She usually bakes our bread and its always delicious. No or very little sugar but lots of flavour and texture!

Here goes:
Sam said you’d like my bread recipe. It’s not quite so easy to pass on as I use a basic recipe which I change depending on which flours and seeds I have in the house or the type of bread I’d like to come up with. But I will try to give you a good starting recipe.

I prefer to use organic flour for my breads but it is a personal preference. The bigger supermarkets nowadays often have a range of organic flours so you don’t have to go to a health food shop.

The basic recipe has the following ingredients

Regarding the flour, I normally use either 100% wholemeal wheat flour. Or a mixture of wholemeal wheat flour, wholegrain spelt flour and plain white strong bread flour (the more strong white flour you use for the mixture, the lighter the bread becomes). Just as long as it roughly adds up to 500g in total.

How to make it:

• Mix flour, seeds and salt all together in a big bowl (the bowl needs to be big enough, so that the dough has enough space to rise to roughly double its size). Make a well in the centre.
• In a separate container with the water, dissolve the honey before you put the yeast into the water (whisk the yeast so that the granules are mostly dissolved too). I normally us a small amount of hot water first to get the honey to dissolve easily and then fill the water up to 340ml with colder water, to get to the lukewarm temperature before I introduce the yeast granules. I like to bake bread with fresh yeast, but don’t find it easily available on the shelves in any of my local supermarkets.
• Pour water-honey-yeast mixture into the well in the centre of the flour. I often spoon some of the flour from around the edges over the water-honey-yeast mixture, just to cover it lightly.
• Cover bowl and let yeast start to grow (you will see it starts frothing to about a 1-2cm froth thickness). Depending on the room temperature it will be faster or take more time.
• When yeast has frothed up enough, start mixing all the dry ingredients and the yeast mixture in the bowl together until the yeast mixture is soaked up.
• When all is roughly mixed together I often carry on kneading on a floured surface outside the bowl. Just roll, fold and push the dough over for about 5 mins. If you find the dough too dry add some water, or if it’s too wet just add some more flour. The dough should not stick to your hands.
• Put dough back into bowl, cover bowl and leave in a draft free space. Let dough prove until it is double in size. This proving process should take approximately 40min to 1.5hr, depending on the conditions.

• When bread has risen sufficiently, take out of bowl and ‘knock it back’. Knead and punch the dough, knocking all the air out of it, for about a minute.
• Shape the dough in roughly the shape of the tin and place into it.
• Cut some lines roughly 0.5cm deep into the top surface (these cuts will open as the dough rises). Cut for example one line along the middle or make a diagonal criss-cross pattern.
• Let the dough prove a second time until it doubles in size. Tin needs to be high enough to accommodate this.
• Pre-heat oven to 220-240 degrees Celsius and place bread into it. It depends on your oven where you place it inside. The oven I use is a fan assisted convection oven and has its own temperature temperament. I bake my breads in the lower middle as the crust otherwise gets very hard. But you will know your oven best and will find out quickly which level would be best.
• Bake for about 45 minutes, take out of tin, turn it over and knock with knuckle against its bottom. If the bread sounds hollow, it is done, if not, leave it in the oven for a bit longer.

Do play around with different ingredients and quantities. You’ll quickly find the type of bread you like the best.

What do skiing and motorcycling have in common?
Birgit and Sir Henry the Hybrid