The email began, ‘We’d love you to be a judge for the Santa Cruz Moto Film Festival’. Over the next weeks the films were sent to me and every single one was a part of the festival with full merit.

Sadly, due to the Cornoa Virus situation, the festival wasn’t to happen live but the organisers decided that the judging and awards should go ahead.

It’s been absolutely fantastic to see how much talent there is out there in the moto film world. All the films had certain things in common besides motorcycles; passion, courage, innovation, inspiration and the ability to spark curiosity. Judging was not an onerous task.

The results were announced on Saturday May 2nd. 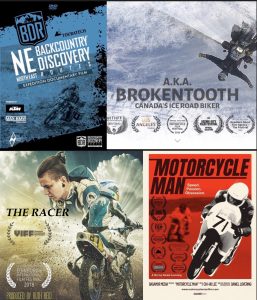 BEST FEATURE FILM was a tie and both films are so deserving of the recognition.
North East Backcountry Discovery Route (NEBDR) follows the Backcountry Discovery Route Team taking a first run on the NEDBR, the tenth route developed by the BDR, that traverses 1400 miles through the Northeast region of the United States up to the Canadian Border. Visit this LINK to learn more about the film, the adventure routes developed and to view the trailer. You can buy the DVD HERE.

Motorcycle Man is a short documentary about Dave Roper and his devotion to pursuing his passion of racing motorcycles. Dave has raced every year since 1972, including being the first American rider to win a race at the distinguished Isle of Man TT, gaining the reputation as a folk hero of the sport. Click this LINK to learn more about the film and watch the trailer HERE.

THE MOST INSIRATIONAL Looking for a feel good documentary about a young racer putting it all on the line to follow her dream? Then The Racer is just what you need! Chosen as most inspirational of the SCMFF submissions – learn more HERE or watch the trailer HERE. The Racer is currently available to view on BBC iPlayer HERE.

SHORT FILM. What is more intense than travelling the ice roads of Canada on two wheels? This film has it all and can now boast being chosen as Best Short for Santa Cruz Moto Film Festival! Congratulations to AKA Brokentooth Canada’s Ice Road Biker. You can view the full film HERE using password btooth2016

Many congratulations to all the winners!

A tale of an audio book – a story of travel, the unexpected, and changing mind-sets.
Fear. Important or dangerous when an adventure is in the offing?