There are times in your life and business when the best thing you can do is to say thank you. My thank you comes shortly after last weekend’s MCN Carole Nash London Motorcycle Show at the ExCeL centre in Docklands.

Indoor motorcycle shows have been attracting an increasing amount of flack from customers. ‘Not enough happening, too expensive, getting smaller’ and so on. If potential customers are saying that, then many of the retailers and exhibitors in the motorcycle world must be feeling the same.

As I understand it, attendance numbers at shows in recent years have been falling. I know there has been a stack of ‘Why?’ discussions on this subject from all quarters of the motorcycle industry. Many seem to be centred on the costs of putting on a show rising to a difficult to juggle level. Others take note of customers thinner wallets and the recent years of uncertainty as to the future of the UK. Politics… People have been careful in uncertain times. I couldn’t help but wonder what the London show would be like. 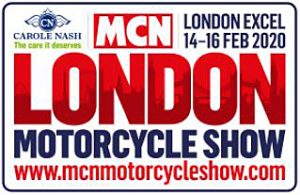 I can only comment on my own experiences. The show seemed to absolutely buzz from approximately an hour after opening. Perhaps that was just the Adventure & Travel area of the show? Not according to the customers I talked to; when there was time for conversation that is. I was busy! That made sense when I was told that attendance numbers for the show were up in spite of Storm Dennis enthusiastically playing his not so funny games outside.

On set up day I took an hour to wander the show. A one hall hive of activity. I always liken it to watching a city being built. Carefully split into zones with stages for different aspects of motorcycling, and a riding track, the set up day feel was spot on. It instinctively felt right. I was surrounded by history, master-craftsmanship, courage, high tech design and all the practicalities of motorcycling.

That ‘spot on’ sensation was topped up by my only other chance to wander; the last hour before the doors were due to open on day one. I could feel the tension and the anticipation in the air, and I really enjoyed watching the pride as last minute tweaks are made to stands. There’s passion in them there displays! 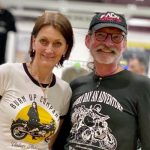 Elspeth Beard and I

I was delighted to be invited to Present and Book Sign in the Adventure & Travel section of the show. MCN had gone to town on it! Its own highly appropriate carpet colours; green and sand. A stage with surrounding 8’ high backdrop vinyl banners of some of the presenters in action. Seating and tables for the 3 authors. Elspeth Beard (First English woman to ride solo around the world) , Zoe Cano (author of multiple motorcycle travel books) and myself.

8 years around the world and 4 books give me the chance to be a part of the buzz. To my delight, MCN had taken one of my photos and had blown it up to be the stage backdrop. It was rather strange to be presenting in front of me! 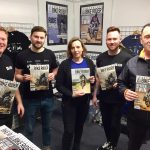 The Adventure & Travel zone was packed with key companies from the world of motorcycle touring and overlanding. My neighbour was Adventure Bike Rider Magazine and nearby were the likes of MotoFreight, Sweetlamb training, MoskoMoto, Rally Raid, Duncan Gough with his guide books to Spain, ExoTogg, the author Mark Holmes and so many more. The list of companies was impressive. 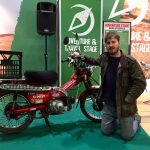 As was the list of Presenters that Nathan Millward had put together. Author and travel scribe Nathan (who came to the motorcycling world’s attention after riding a 110cc ex Australian Postman’s motorcycle from Australia to the UK) has organised the Adventure & Travel zone for the last 4 years and under his guidance the quality of the area gets better and better.

Top rate presenters such as Elspeth, Bruce Smart (RTW on a GSX-R1000), Zoe and Mark Holmes were joined by passionate motorcycle travellers who are less well known but have fantastic stories to tell. Would you take an ancient Royal Enfield and turn it into an electric motorcycle? Or ride a Honda C90 to the Sahara? Or make your overlanding fit your working life by doing three fly and hire trips a year in far flung lands? Or head for the Balkans as a novice rider? Or enter the Mongol Rally on 125cc bikes, or… Well actually, you had to be there! Oh and, are you dreaming about what to make happen in life when your kids have left home? Simon Weir had some great ideas. 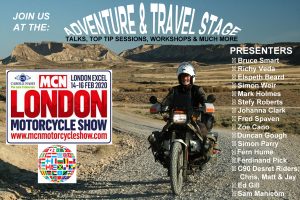 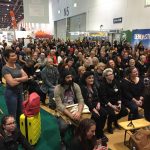 The buzz of the zone was very much added to by a hundred plus women riders from all over the world. They had flown in from as far away as Chile, Australia, the USA to represent the 19,000 plus members of Women Riders World Relay. A phenomenal achievement! Click on the link if you don’t know about them!

Thanks to Nathan and MCN team, the area was packed with fascination every day. I lost count of the comments from people who had been inspired to think, ‘I could do that!’ ‘I want to do that!’ ‘Now I know how to start.’

The essence of what a motorcycle show is about – entertainment, and inspiration. Many congrats to everyone who made this show happen so wonderfully!

A special thank you to Simon Goldsmith who presented me with a framed drawing on yours truly. It’s an honour. Thank you Simon! 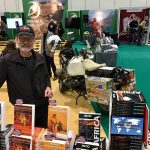 My R80GS ‘Libby’ inside for a change and enjoying the well-deserved attention. Oh, and me and my books!”

Last but absolutely not the least ‘Thank you.’ Thank you to everyone who stopped off to say hello, to pass on information and of course to buy one of my books. It’s been great linking up with you. See you somewhere on the road this year!