By Sam Manicom on July 5, 2018 in Miscellaneous

I’m going to ramble a bit but I hope you’ll bear with me. I’m feeling incredibly grateful today, so I’m starting my ramble with this… We motorcyclists know how lucky we are, but do we take much of the luck for granted? If we do, perhaps it’s because good luck is actually the norm for us?

Each of us has a great tale to tell about how we became motorcyclists. That’s just a part of how fantastic being a motorcycle rider is, isn’t it. The fact that we are all unique, that it’s perfectly ok to be so and that actually, it’s encouraged. However, the luck I’m talking about isn’t discovering this freedom.

I’m not talking about the amazing motorcycles we can have, or the phenomenal riding we can make happen; I’m talking about camaraderie. As I people watch, which is endlessly fascinating isn’t it, I’m often reminded that part of the uniqueness about us two wheeled types is that we easily move between independence, solitude and being in groups. We human beings are tribal animals by instinct aren’t we, and I think that if you have to belong to any tribe, then ours is hard to beat.

In spite of the occasional bravado, the moments when testosterone raises its head (the female version exists too), and the times when an air of competition creeps in, there’s one thing that’s constant. I see this every time I look at motorcyclists. The greater percentage of motorcyclists are friendly, kind people who would bend over backwards to help another rider, or in fact another person who is in need. Why is this? Is it because we are out in the elements with no barriers between us and life? Or is it because we are part of something important, invigorating and honest, as whoever we are, and that’s liberating. It pulls the blinders or blinkers away from our eyes and we see more – see more opportunities that is.

This thought came into my mind again today as a result of a mechanical cock up with my BMW R80GS Libby. That’s short for liberty by the way. It’s what she gives me, but I’m digressing. After a huge number of miles, though nothing was wrong with it, I decided that my gear box owed me nothing and should be refurbished. I don’t have access to a workshop so hunted hard for a reputable mechanic to take the rebuild on board for me. A few thousand miles later, and after the rebuild, the magnet in the oil drain looks like a silver haired punk rocker! 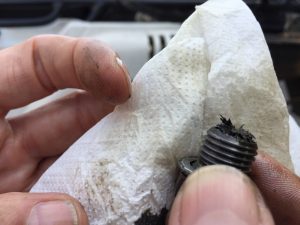 Spikes that bode no good 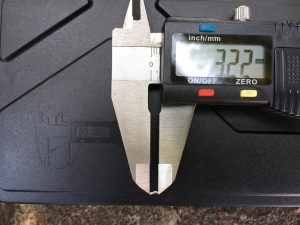 As you’ll know, I’m an optimist and I’m a great believer that unexpected adventures are frequently the best. But my first thought was, ‘Why?’ The next, ‘Oh blast, this could be going to be expensive.’ Then, ‘Finding the money is going to be fun’. And my next, ‘Well, let’s get on with it.’ Libby is my only means of transport and I have a lot of miles planned for the coming months. These were followed by another equally important thought. My bike is class and her timing is impeccable. At least this has happened here in the sunshine, and not on the road with a deadline and teeming rain to stand around in. The first glimmer of silver showed itself.

Literally a couple of hours later, the silver lining really began to peek past the breakdown clouds. A motorcycling friend heard about the situation and he started a roll of connections between other motorcyclists. As a result, they have made something very special happen, which is the perfect illustration of my motorcycling camaraderie point.

‘Get it to me’, John said. I’ll take it out for you. I have a friend in Germany who is insisting that he wants, after the experience you’ve had, to rebuild it for you for nothing!’ What an offer. We’ve never met either.

The next morning, in just under an hour, the really friendly SOS motorcycle recovery driver turned up, my bike was strapped down and off she went on a two hour four-wheeled journey.
Four hours later, John called to let me know that the gearbox was already out! I was about to arrange for the gearbox to head to Germany via a courier, when I had a phone call.
Another mate Simon had heard what’s going on. Did we realise that another friend, Trixie was due to drive to Germany that night. And she was going to the same area as John’s mechanic friend Willi. And yes of course she would take it.

12 hours later, Willi and his pal Reinhard were already working on it. 3 days later the refurbished gear box is on its way back to me. Wonderful.

The punk rocker hadn’t been brutal! He could have been. The metal on the oil drain magnet wasn’t from damage, but left over from the original rebuild. One bearing was a little worn and there was a little too much tightness in one of the settings. All could have caused problems later.

The gearbox circumstances have reminded me yet again, what an amazing bunch motorcyclists are. The situation has made me sit up and take note of my friends even more than I did in the first place. I’m proud to be able to ride a motorcycle and so to be connected to so many superb people. Cheers.