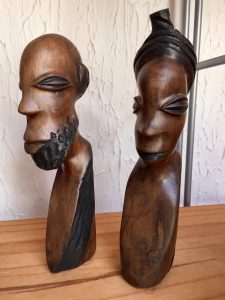 I was looking around our lounge at some of the things I’ve collected over the years of travel. Each item has a memory attached and nearly always its a people memory.

With these two, I’d arrived at Victoria Falls and was looking to lighten my load. I was carrying a used front tyre (but still with a thousand or two worth of miles left on it). Back then, getting replacement tyres wasn’t so easy and I’d been off the beaten track for a while so… But now, I was in Southern Africa. I traded the tyre with a man who was hand-carving statues by the side of the path to the Falls. He actually wanted to give me more for the tyre, but these two seemed just right to me.

As for Victoria Falls, I was blown away by the beauty and the power of the falls and their surroundings.

‘The famous Victoria Falls, ‘Mosi Oa Tunya’, ‘The Smoke that Thunders’. After locking up anything that would have been a pain to loose, I went down a path through the trees, and there they were. The falls were breathtaking! Did Queen Victoria ever manage to imagine what they really looked like from the etchings and paintings she must have been shown? Probably not, in which case, she missed out. If they were this good in a drought, what would they be like in the rainy season?

The chasm below me thundered with the noise of the millions of gallons of water that were plunging into its depths. The lethargy had gone and suddenly I felt absolutely privileged.
There were plenty of paths around the top of the falls and one of them took me right to the water’s edge. From that point it looked as if there would be a way to get right out into the middle of the falls. Thanks to the drought the water level was low enough to be able to hop from rock to rock. Out there the air was moist, the sun was only warm, and the falling water was sucking a breeze. The noise of the rest of the world was drowned by the constant stormy roar of a thousand rushing tons hitting the bubbling froth and slick rocks below.

As the afternoon came to a close, I sat up river under an overhanging fig tree watching life float by. Coffee coloured and very scrawny monkeys were playing in the shallows at the edge of the Zambezi. I hadn’t realised that monkeys would do anything with water, other than drink it. But every so often, one of them would find something of interest on the riverbed, and would stop to examine it. Inevitably one of the others would splash across to see what had been found. I began to realise that each of them had their own character.

One was the investigative type and there was hardly a moment when he wasn’t examining something or other. One had to be the centre of attraction and constantly played the fool, and there was one who sat quietly to one side and watched the world with me. Suddenly the peaceful play erupted. The fool had grabbed something shiny from the investigative fellow and laughing and chattering to everyone, scampered into a nearby tree where he sat taunting. Finally the investigator was goaded into racing up the tree too, and the fool, with a laughing air of disdain, dropped whatever it was back into the river before leaping to another tree.

As the cloudless sky began to change into a rich orange-red, the forest on the other side of the river hardened into a silhouette. Within moments, the dark green forest had turned into a black, palm tree topped line that seemed to be suspended in a world of red sky and red Zambezi. From behind me, the deep mellow rhythm of wooden drums floated through the calm warm air. As the reds mellowed into dusky shades of purple I wondered if Livingstone so many years before might have sat on this very spot and marvelled at the world that he too had found himself in. Then the mosquito’s found me; which meant a quick run for the shelter of my tent. I’d stupidly run out of mossie repellent, but consoled myself with the thought that Livingstone wouldn’t have had any of that either…

Africa. This is a continent where you have no idea what’s going to happen next. It’s a continent where travelling slowly pays off. There’s so much to see; so many side turnings to explore. Every day is an adventure and every day will bring you smiles. Even the challenges have silver linings…

The Largest Free Motorcycle Meet In Europe – See you there?
The 2018 Overland Event