Any overlanding journey is going to have its tense moments isn’t it. I was determined to ride and explore Iran, but things weren’t running smoothly at all. It took me 3 months of knocking on the Iranian Embassy doors in Delhi, and across Pakistan before I got my visa. I was against the weather clock too. Winter was coming and I needed to ride from Iran through Turkey and Eastern Europe. I was worried. Winters are harsh in those parts of the world.

My visa was finally issued to me in the Pakistani city of Quetta, just one day before I had to be out of Pakistan. The problem was that I had 400 miles to ride on dodgy asphalt and dirt roads before I made it to the border with Iran. I was nervous. Scare stories abounded about the road conditions, lack of fuel, bandits, huge speed bumps and… But at last I was free to ride! And what a drop dead gorgeous, fascinating part of the world!

I hope this excerpt from ‘Under Asian Skies’ will give you a good taste of things. 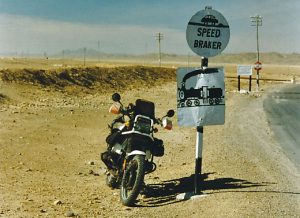 ‘I was going to miss Quetta. Though the time there had been so tense with uncertainty, it had been a fascinating place to stop. What was going on over the border in Afghanistan with the Taliban produced an edgy feeling. Guns had been the norm and suspicion was in just about every first look we’d been given by the people. But the mix of cultures, and the strong feeling of life being lived to the full, had outweighed the tenseness. As I glanced in my mirrors I hoped that someday I’d be back.

Taking one last look at the soft browns of the mountains surrounding Quetta, one of which was covered with snow, we eased on through the foothills in the clean crisp dawn colours. The road was good and I felt great. A new adventure was beginning, and I was really conscious that I was riding through an area steeped in history. This area of Baluchistan has a landscape intrinsically hostile, and its climate makes no concessions for the traveller.

Even though so bleak, it has been inhabited since 7000BC, and until it was captured by Alexander the Great it belonged to the Persians. But the region has always been a problem for rulers. It’s so hard to travel through that many ‘conquerors’ controlled it pretty much in name only. The people who live there are called the Baloch but no one really knows where they originally came from. There are all sorts of stories, including that the people came from Syria or Babylon, or are even one of the ‘Lost Tribes’ of Israel. Modern experts think that the people migrated from the southern edge of the Caspian Sea. Wherever they came from, the people have a reputation for being fiercely war-like and travellers are warned of the risks of passing through the region. With the troubles over the border in Afghanistan, this reputation was simply enhanced.

I found the speed bumps I’d been warned about and yes, many of them were unmarked. They were frequently in illogical places, and very steep. They were also on either side of the railway where the road meandered back and forth across the tracks. Hand painted warning signs on black and white striped poles let us know about those, at the last minute. The bus was forced to gently edge up and down each one, and as it did so I renamed them. 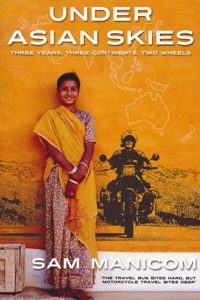 They weren’t speed bumps at all – ‘Speed Killers’ seemed far more appropriate. If I’d not been riding gently I could have come a real cropper, but the road was pretty good as it looped through rolling hills and scrubby, rocky bushland. The deep blue sky to the north of us had low-lying wispy horizontal trails of thin white cloud painted across it. In the distance, a layer of indigo craggy hills seemed to be floating on a bed of soft white mist. The crisp air tasted fresh and clean, and as the hours eased on by we passed not a truck nor a car.

The PSO petrol station at Nuskki had diesel but no petrol…

Under Asian Skies – Tales of the Unexpected

The friends you make on the long road
Do you like your dentist?