The show? A brilliant surprise for Adventure Motorcycle Travellers. This year the show organisers, Motorcycle News, had geared up the Adventure Zone of the show to include a stage, a display space and sales space for some of the best known overlanding authors and film makers in the world.

Nathan Millward (Overlander, journalist and author) worked enthusiastically and with real insight to make this an area that anyone with an interest in overlanding would head to, and probably get stuck in!

The atmosphere was brilliant and phew, when I was put on the spot by a film crew, I don’t think I stuffed up too much! Why travel? Check this out to find out why. 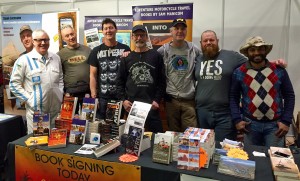 Though not authors Gareth Jones (around southern Africa on a Harley – off road too) and Sean Dillon (The length of the Americas on a Honda C90) were also guests on stage and available for overlanding enthusiasts to talk with. 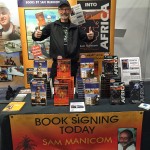 I felt completely privileged to be book signing alongside such people. No snobbery from this lot! Just overlanding buzz and lots of joy of life.

All of us had been invited to bring our travel bikes to the show and this was the first time that Libby had been on show at an indoor motorcycle event! I think she got a taste for all the admiring looks and comments. After all, she does have over 282,000 miles on her now and every ding tells a story of the open road.
The bikes ranged from Sean’s C90 right the way through to Sjaaks R1! yes, that’s what he overlands on.

It just goes to show that it doesn’t matter what you ride, but that you’ve got to like riding it! 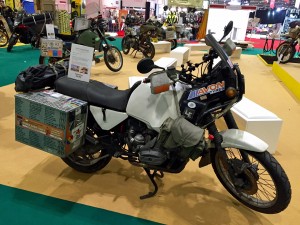