I’ve been thinking about mistakes, humour & ice. A weird combination? So what sparked this thought process? Riding down through Africa I parked my bike on the steeply sloping tarmac drive of the immigration compound at the Ethiopia – Kenya border. But, in the heavy rain, I made a mistake as I did so. If I could have kicked myself at that moment, I would have done!

I parked with the bike leaning far too far over on the slope. Getting it upright again was going to be a dicey business.

The overhanging roofs of the compound sheltered scores of damp, waiting, and watching people. Inside, the paperwork was dealt with, with efficient ease. But outside, the rain was still bucketing down, and my bike still had its horrible lean. There was nothing to do, but go for it. All eyes turned in my direction as I stepped out into the torrent.

Success! The bike was upright. I started to step it backwards, one careful foot at a time. Part of me wanted to breathe a sigh of relief, and the other part of me concentrating hard on not cocking it up.

But I’d not seen the banana skin…

A second later, the bike and I were on the ground. All those faces were now split with smiles and some were laughing so hard that they had tears joining the rain on their cheeks. Buster Keaton would have been proud of me!

Seconds later, the people rushed out into the rain to help me pick the bike up. None were laughing now. All were concerned for my welfare, until they saw me grin. Then, the laughter started all over again.

This episode made me think about how mistakes on the road can often be magical ice-breakers and that there is usually a funny side to life. 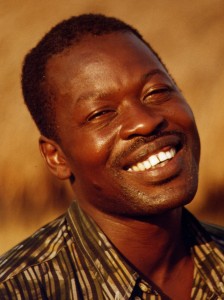 You can listen to more tales of the road like this with the Into Africa Audio Book.

Into Africa is also available from Amazon Kindle and as an Enhanced e-book from Apple i-Books.

You can find Excerpts from Into Africa on this page. The first will not make good bedtime reading…

A Matter of Kindness
What on earth have the Beatles got to do with Overlanding?