Four years ago, I and many friends had the feeling that the London Motorcycle Show was on its last legs. It got smaller each year, the once great atmosphere lessened, and the complaints about the costs to attend increased. Not good. Was this a sign of the times in the UK? Were motorcycle shows in general a bit of history that was in the process of dying? Was this once iconic show going to slip from the UK’s motorcycle calendar?

I suspect that many a gloomy conversation was held over a beer or two. What was going wrong? Was the venue wrong for the show? Many of us remember the old days at the Alexandria Palace. But surely not. ExCeL has plenty of easy access by public transport, all the display space is in the warm and dry, there’s undercover parking for bikes and cars, a wide range of hotels within minutes and so the plus points stack up. But still the show was struggling.

Were the chances to see the array of new bikes and kit in the South East going to be relegated to dotted around dealerships and glossy photographs alone? In general the atmosphere was one of gloomy sadness.

Suddenly, 2 years ago a fresh wind seemed to blow through the MCN Carole Nash London show. Layouts were changed, and zones were introduced. Zones? Classic, sports, adventure, custom and so on. Each clearly marked out with different coloured carpet and signage. To begin with this was accepted as being something interestingly new but now, people also understand how it works. There’s a cunning plan involved.

Interested in Classic bikes or Custom bikes? Then head there first. Everything the show can offer to do with your passion is laid out in one easy to explore area. Heart contented, biking business done, passion satisfied, you can set out to meander the rest of the show with eyes open to new opportunities.

Last year, more changes were introduced and more positive feedback flowed. Perhaps new life had been breathed into the show. I waited nervously, really, for this year’s show. Would the improvements continue or would the past two years’ worth of hard work be fizzling. Well, I’m happy to say, “Not a bit of it.” I talked to a lot of exhibitors during the course of the show and the greater majority were giving me a thumbs up. The rest were making valid points and no doubt the organisers will take action on those. There’s a real hunger to get ‘it’ right. 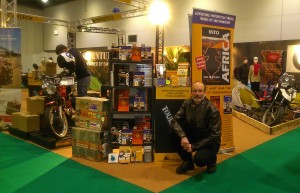 As for my personal motorcycling passion, well that of course is overlanding. The Adventure area was packed with companies that aim to help you travel. By supplying you with some brilliant kit, or for those with less time the chance to hit the road in many parts of the world with the protective arms of a touring company helping out.

One great new development was the adoption of the Adventure Island. This, within the Adventure section of the show, was set up with a stage and spaces for travel writers to book sign and for Cotswold Outdoor the display some of their range of camping gear.Sponsored by BMW and Touratech, but excellently organised by Touratech, the area buzzed within minutes of the doors opening each day. (A personal note of thanks to Claire, Nick and the crew for all their help!) 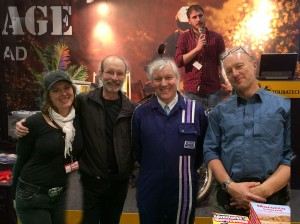 Very well-known names from the world of adventure travel such as Chris Scott, Nathan Millward, Austin Vince, Nick Sanders, Julia Sanders, Graham Hoskins, Nick Plumb and Si Pavey took to the stage with 25 minute slots. Overlanding energy flowed. They even let me on the stage! My topic? Titled ‘They said, You’ll never make it!’, we chatted about how dangerous preconceived ideas are. So often, such thoughts act as closed doors between us and adventure. Of course there some things that can happen which are better left without much thought, but even those are usually the start of a new adventure. With audiences of up to 50 people at a time, methinks more than a few thought-seeds of long distance travel were planted. Who is Zoe Cano? Look out for her book ‘Bonneville – Go or Bust’

Look out too for footage from Adventure Bike TV. The crew were at the show and for sure there will be a raft of interviews with people you are going to want to hear from. The atmosphere in the Adventure area? Pure friendly buzz. I have to say that with improvements like this, I’m already looking forward to next year! But then again, I’d better catch up on my sleep and rest my feet first! 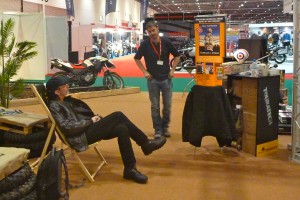 The end of the day!

Thanks very much to everyone who came to say hello and to buy books from all of us. Oh, and double thanks to those of you who brought me in mugs of tea! Life saving for vocal chords!!!

Photos by Chris Scott and Ken Binns – KGBphoto and Multimedia