Two times that the BMF Motorcycle show in Peterborough has had wall to wall sunshine that is. And what a difference it makes to people when the sun is out.

The show was smaller in size this year, but much bigger on atmosphere. I have no idea of what the attendance numbers were and I’m not going to ask. More important was did the people who went enjoy themselves? I’ve not had one single moan made within my earshot so that, for me, answers that!

If you have been at the show then I hope you came over to say hello to me, my partner Birgit and Iain Harper from the HUBB UK and the Ted Simon Foundation. Thanks to everyone from the GS Club UK that did so, and made us so welcome on their stand too! And the ducks? Ask me next time : ) 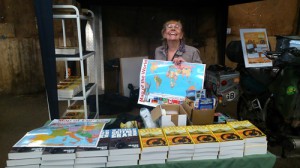 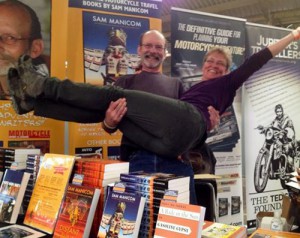 Around us in the Adventure, Overland and Touring Hall were exhibitors from the cream of the overlanding world. Great fun to be working alongside such a knowledgeable, and friendly bunch of people. For me, this is a big part of why I do what I do. Overlanders and the companies that support them are inevitably a very positive bunch of people; it’s an incredibly addictive atmsophere. You’ll link up with a most of these companies at the HUBB UK Overlanding event between the 19th and 22nd of June.

Also in the Overland Hall were Graham Hoskins from Mad in the Med and much more, must read authors such as Nathan Millward (Long Ride Home), and Dom Giles (Gone Riding), overlander and journalist Jackie Furneaux, with filmmaker Ed March just releasing his DVD from his Malaysia to UK ride. If ever there has been a troubled release this was it, and the project kept the drama going until the last possible minute. The DVD production was hugely late but promised for a pre-show delivery. It didn’t arrive. ‘Deliver it to the BMF’, says Ed. But it got delivered to his home, well after he’d set off for the show. One VERY long day started to roll for him and his partner Rachel. No worries – Ed’s presentation and the DVD went down very well and I think that anyone who invested in helping to make it happen, will feel very happy with their investment.

Star of the show though should have been Graham Field with the launch of his new book – Ureka! But actually, I think I got that wrong. The real star was his Mum, who’d come along to help him. Excellent. And the feedback I’m seeing on Ureka will be making Graham very happy.

Another bonus of the show this year was the Geek Media Cinema. Last year, presentations had a real issue with the IT and the quality of the screens. Not this year. None of we Presenters could have wished for better. My presentation was new and the first time it’d been done in front of an audience, so of course I was more nervous than usual. The topic? Really, why go Overlanding? What’s it all about?

Other than everyone who stopped off to say hello and to buy books from me, I have to say that my own highlight was having Birgit with me. Soft I know!

Top to Tip on a Royal Enfield Continental GT?
Into Africa as an Audio Book? Zen Motorcyclist say what they think!