The Motorcycle Live show at the NEC (National Exhibition Centre) in Birmingham is the UK’s biggest indoor motorcycle show, and for me it’s also the one with the most wow factor. Most of the motorcycle manufacturers are there and they spend thousands on putting their stands together. The rest of the show is an enticing mix of everything from adventure travel equipment suppliers, touring companies, clothing companies, custom ear plug manufacturers, and so this list rolls through. There’s something for everyone at the show and even the opportunity to ride trail bikes indoors! 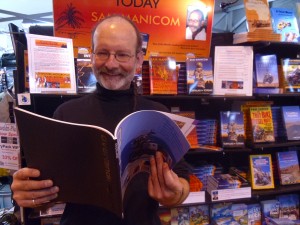 I was invited to book sign on the Traveldri-Plus stand for the duration of the 9 day show, and included in the invitation was the offer of being there on the set up days. I really enjoyed this. You roll into the huge halls, which are just about empty of anything except steel girders, concrete floors and very cold air. And over the next three days, with enthusiastic hammering and sawing from carpenters, the efforts of fast working crews of decorators, carpet layers, delivery men and coffee vendors, the show suddenly seems to come alive.

The sense of excitement is quite tangible as the last hours roll by towards the show opening. Last minute changes are made to stands, uniform shirts are straightened and everyone wonders if this show is going to be a success, or whether the significant financial investment is going to be an expense which simply hasn’t paid off. You should see how much it costs companies to be at the show! It’s brain boggling!!!

Then, that’s it. The doors open, and the first people come rushing in. The day is on a roll and equally quickly you suddenly realise that its 5pm and the announcers are asking people to head for the exits. Phew!

Every day rolls with the same level of tension and excitement and I love it. I particularly enjoy the chance to meet people from all over the UK – many of whom have read my books and stop off simply to say hello, or to buy the next books in the series.

This year the Motorcycle Live entry figures were up by 14% which just goes to show that even in times of recession, you can’t put motorcyclists down! Motorcycling is a passion, not just a form of transport, a hobby, a sport or a leisure pastime.

By the end of the show I was smiling. Book sales were great, with the best seller this year being the first book in the series, ‘Into Africa’. To me this is a really good sign. It means that many people are finding my books for the first time. Hopefully I’ll be seeing them again! But I also enjoyed the show for all the people I managed to talk to. The buzz of enthusiasm that surrounds this show is magnetic and there’s something special about being surrounded by so many positive enthusiasts. Will I do the show again next year? I certainly hope so! See you there?

Vietnam Facts
Into Africa at the Wilderness Lectures