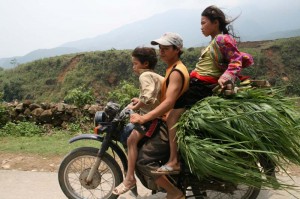 By now I hope you’ve read the first three parts of this series. If you have, then you’ll be ready for some facts about Vietnam and travelling there.

Visas
Download the application from the Vietnamese Embassy in London. This info is applicable at the time of writing.

Travel Insurance
Don’t skimp on this!

Are you legal to ride a bike in Vietnam?
Technically, no you aren’t unless you have a Vietnamese motorcycle licence. That is almost impossible to get if you aren’t living in Vietnam.

However, if you have a full UK Motorcycle licence and have an international licence to back it up you’ll almost certainly be ok.
The real time situation is that the police are highly unlikely to stop you unless you do something daft or dangerous. It seems that they have been told to leave tourists alone. They have been told that they, ‘Will be fired and arrested if they try to shake down tourists.’ This sort of threat has turned into a catchall which means that tourists on bikes rarely get hassled. Quite rightly, in these times of recession in particular they need our tourist money to come into the country.
You’ll get blank expressions if you ask about insurance. You are going to have to wing it but be prepared for the fact that even your UK travel insurance won’t cover you for third party liability. It’s the risk you take.

Health
You need a full set of typical travel inoculations – your GP can advise, or you can get in touch with the St Pancras Institute of Tropical Medicine. Some of the inoculations you should have require a course of injections over a period of 3 months, so you should check this out well in advance.

Food or waterborne diseases are the main sources of risk. Bacterial diarrhea, hepatitis A, and typhoid fever.

And finally the catchable water contact disease is leptospirosis.

The only vaccine required by international regulations is yellow fever but proof of vaccination will only be required if you have visited a country in the yellow-fever zone within the six days prior to entering Vietnam.

Avian Bird Flu is an issue in some areas and Dengue Fever can cause some real problems. The main risk to your health, besides manic traffic, is malaria. However, there are significant chunks of the country that are virtually malaria free – these are mainly in coastal regions but its work checking for the specifics. It’s also worth taking the usual care to lower risk of being infected. Spray your clothes with Permethrin. Wear light coloured long sleeve and long leg clothing in the dawn and dusk. Use a mosquito repellent that has a minimum of 50% Deet in the mix. Do take your prophylaxis as advised, but you should be aware that your tablets won’t stop you getting malaria – they will just slow down the effects so you can get to help while you are compos mentis!

Its well worth packing waterproof plasters and a small container of disinfectant – it’s those small, easy to make cuts that are the ones so often infected fastest.

Should you worry about all of this lot and should they put you off going to Vietnam? Nope. This set of warnings is pretty light for a tropical country and most of the safety factor comes from doing your research and then using common sense.

Food
Vietnam has an amazing reputation for superb cuisine and tucking into the local grub is without doubt one of the highlights of a visit. There are a few cautionary thoughts though. Usually you’d try not to eat anything that has been sitting around and has just been warmed through but many of the soups or Pho is made of ingredients that have been sitting around waiting for you to make your order. With these I think the best way to make a decision is to judge how clean the situation is and to look to see how many locals are eating there. Steer clear of salads and other uncooked vegetables. Try to steer clear of raw meats and fish, though that’s not going to be so easy unless you read Vietnamese! Ice is generally ok to have in drinks in the big cities but just don’t do it out in the countryside.

One of the reasons that Vietnam has such a large and varied menu is that it’s a neighbour of China and over the generations, Vietnam has been occupied by the Chinese on several occasions and one of their legacies is the taste for the more unusual foodstuffs. Some times it’s best to concentrate on how the food tastes than what it looks like or may contain. Oh, and if you can’t use chop sticks yet, get some practice in. In most places you won’t be given a choice of eating utensils.

Also, try to change your mindset about how you order your food. This is another Chinese influence. If there are two of you, order a range of dishes and a couple of extra plates. Then both sample each of the dishes. The Vietnamese have a whole range of customs about eating together and they are really useful to know about in advance – just in case you are lucky enough to get invited to someone’s home. Oh, and if that happens, always take a gift and present it with both hands.

Vietnamese cooking is more like an art and there are some restaurants where you are given a virtual cooking lesson with the food being prepared right at your table. It is always beautifully presented.

Cultural customs
The culture of this country is extremely complicated, or perhaps I should say, very alien to Western cultures. It’s worth spending some time learning about the rules as simple knowledge will stand you in very good stead. I can’t do them justice here, but some of the rules are:

Quite simply, this land has so much to offer an adventure traveller. There are plenty of challenges and surprises, but everything is manageable if you have an open and enquiring mind, and love to sample new things. I hope you enjoy as much as we did.